"We Do Not Own The Rights To This Music or Song" 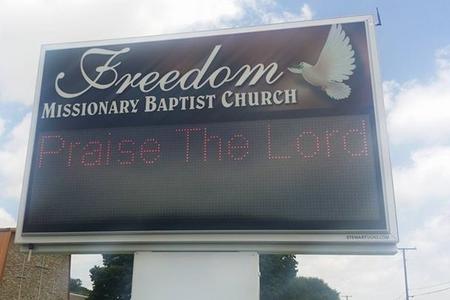 It was on a Monday night, the 14th day of May, in the year Nineteen Hundred Seventy-Four, a few of God's children were disappointed and disillusioned because burdens had become so heavy they were almost unbearable.  They didn't want to go home, because home didn't seem to be the right place to go this strange night.  They knew that the Lord had said, "wherever two or three assemble in My name, there I am in the midst," so they gathered at the home of Bro. & Sis. Don E. King to offer up prayers and supplications to the Lord, with faith and believing that He would bring them through.

The Lord already had blessings stored up for them, but he wanted their faith to match His promises.  They didn't know it, but the church was in labour.  When they stepped out on His word, TWINS were born.  The birth of Freedom Missionary Baptist Church and the birth of a minister who was long overdue.  Voices of praising and rejoicing rang out in the night as those 24 pioneers thanked God for a miracle.

Mrs. O.M. Bowman was present that night and she later allowed her Dallas residence to be used as a place of worship.  It was at this place that Freedom Baptist Church began to grow and mature.  Her first visiting minister was the Rev. O.D. Davis of Temple, Texas.  The St. Andrew's Institutional Baptist Church, Rev. Charles Reese, Pastor, was the  first visiting church.  It was here she experienced her first wedding, the union of Bro. & Sis. Elgin Perkins Jr., and her first High School graduate, Sis. Pamela Thomas.

Soon Freedom was forced to find another place to worship.  She thought she had found a home in Alta Mesa, only to learn she must keep searching.  Thanks to Pastor Wright & The Peoples Baptist Church, she settled in the People's El Shaddai Village for a short time.  Some termed the community center "a strange place" to worship but she continued to sing Zion songs and to give the best of her service.  She went from one apartment to the next spreading the Good News and the Gospel and approximately 60 souls accepted Christ as Lord of their life.

Next, She was led to 9021 So R.L. Thornton Frwy, where she continued in her faithfulness and was rewarded.  The membership increased greatly with a large percentage of tithers.  She gave birth to her first son in the ministry, Rev. Derrick King. Honoured her first High School-College graduate, Felecia Mason; and hounoured her first Masters Degree recipient, Hessie Goldsmith.

During her four (4) years at this place she experienced many new births and weddings, enjoyed some good times, suffered some hard times, yes, and even felt death's sting.  But, through it all she learned to TRUST IN GOD?

Looking back we rejoice for certainly, "we have come a long way," but looking ahead through the grace of God it's plain to see.